The lawsuit in state court here also alleged that the bank was involved in illegally evicting hundreds of tenants who were renting the residences. The city attorney’s office, in a news release, said Deutsche Bank’s liability for repairs and payments to former tenants “is potentially in the hundreds of millions of dollars.” 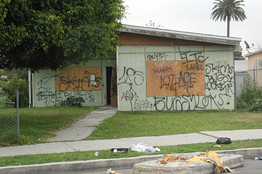 Vacant property with graffiti on exterior, on South Willowbrook Avenue. Deutsche Bank National Trust Co. held title from in or around April 2007 until in or around May 2008. The photo was taken by a Los Angeles Department of Building and Safety inspector in or around January 2008.

The city attorney of Los Angeles filed a civil complaint Wednesday against Deutsche Bank AG, alleging it allowed hundreds of foreclosed residential properties to fall into such disrepair as to become public nuisances. See photos and property information supplied by the City Attorney.

Deutsche Bank, in a statement, said “the Los Angeles City Attorney’s Office has filed this lawsuit against the wrong party.” It said the loan servicers, not the bank, which served as trustee on the loans for the foreclosed properties, were contractually responsible for maintenance and tenant issues.

For over a year, Deutsche Bank said in its statement, it has offered to help city-attorney officials contact the loan servicers, “but they have refused our help and would not even tell us which properties they were talking about.”

The city attorney, in a written response, said Deutsche Bank, as owner of the properties, was responsible for them.

A spokesman for city attorney Carmen Trutanich said this was the first such suit brought by the office. However, he added, similar investigations were ongoing. He declined to say what other banks might be under scrutiny.

Mr. Trutanich, who was elected city attorney in 2009, recently filed for a possible run next year for Los Angeles County district attorney, one of the more powerful local law-enforcement jobs in the country.

Suits have been filed in other parts of the country over the past few years against major financial institutions in connection with properties that went into foreclosure amid the national meltdown of the real-estate industry.

The city attorney’s suit said the defendant took title to some 2,000 foreclosed residential properties in Los Angeles. The properties—single-family homes and rental properties of up to four units—are concentrated in lower-income areas, such as south Los Angeles and the northeastern San Fernando Valley.

Upon taking title to the properties, Deutsche Bank “disregarded virtually every one” of its legal duties and responsibilities as property owners, “resulting in the creation and maintenance of an unprecedented number of vacant nuisance properties and substandard occupied housing units,” alleged the suit, which focused on 166 properties.

The city attorney’s news release said Deutsche Bank was “repeatedly notified of the substandard conditions” at the properties.

The troubled buildings have depressed property values and contributed to increased crime rates in the neighborhoods, the statement added.